Previously Gorter announced that they have supplied the roof hatches for the WK stadium in Salvador, Brazil. The Dutch team captured their first victory in this stadium against Spain and will play here again on Saturday the 5th of July. This is in the quarterfinals against Costa Rica. Gorter wishes the Dutch team good luck!

In the stadium, the Bahia Arena, Gorter roof hatches have been installed in combination with Gorter scissor stairs which provide a complete roof access solution. The roof of the stadium has a very light construction. The unique design provides a 30% to 40% reduction in the use of steel. Read more about the Gorter roof hatches and the World Cup stadium in the Gorter references section. 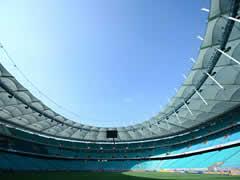