Gorter at Design Build in Melbourne

The 2014 Melbourne Design Build expo was a very successful 3 days in which we were able to display our floor doors, electric scissor stairs and glazed roof hatch to the attendees of the show.

Much interest in the Gorter products

The display welcomed many comments from designers, builders and architects alike who commented on how impressed they were with the design and quality of the Gorter products. Many commented on their upcoming projects they had where the roof hatches, both glazed and aluminium, as well as the scissor stairs, would be of immediate benefit to them, whilst others pondered on how the products would be of benefit in the near future.

The Design Build expo was a great opportunity to generate interest for the new glazed roof hatch being released later this year. Many people requested information as they were so impressed with the larger roof hatch, and thought the 1000x1500 roof hatch would be even more suitable for upcoming projects.

It was also a great opportunity to meet architects and designers who had specified Gorter products in the past. For some, it was an opportunity to see, touch and operate the products for the first time. After seeing and trying the display products, they were now more than satisfied that they had made the right choice to specify Gorter products and looked forward to being able to specify Gorter again. 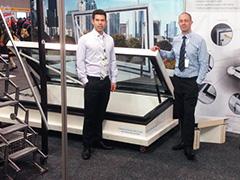 The Design Build expo was an awesome introduction for the newest member of the Gorter Australasia team Paul Fratto, who joined the Gorter team on March 11th this year. He was able to demonstrate his knowledge of the Gorter products and answer many of the questions asked and also get to see first hand how impressed so many people were with the Gorter range. His enthusiasm and energy he brings to the Gorter Team is very impressive and in turn will be imparted to our customers.